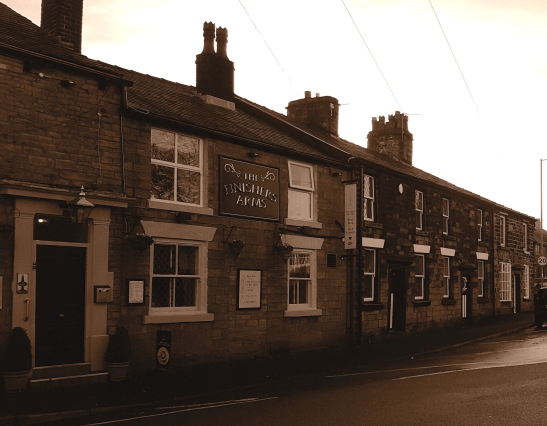 On the way up to Doffcocker Lodge, our local nature reserve, the walk takes the dog and I  through an old part of this side of Bolton. This is Pool Place, a hamlet from around 1750. The cottages were built to house workers at the Smithills Croft and Bleach works. We live on the site of the old bleachworks.

The pub also dates from that time, its name Finishers Arms from the finishers who played a key role in textile industry. According to Alan Simpson’s enjoyable booklet on this area, the pub was a popular meeting place for the managers and skilled workers from the Croft. Shady deals were apparently undertaken in the upper rooms of the Finishers, resulting in a police raid in the 1890’s. I’m not sure what these deals could have been. According to the current landlord, the place is haunted by a woman who lost her way at the beginning of the 20th century. She was called Martha and was walking back from the pub to the nearby village of Barrow Bridge when she got seperated from her husband and found dead the next day in one of the pools in Moss Bank..

Despite an exorcism by the vicar who happened to live just behind the pub, strange goings on continued to happen, right up to recent times.

Some history from “One Mile of History”, by Alan Simpson, self published in 2015.

This entry was posted on February 3, 2017 by antondotreks in Blog, Bolton, Out and About and tagged Bolton, Finishers, Pool Place, Smithills.