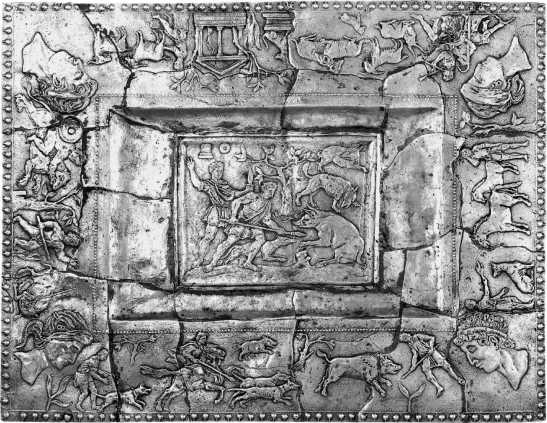 I was out walking in Derbyshire yesterday, training a group before they set out on their first DofE expedition in a couple of weeks. The area we were walking in was not particularly good walking, but our route linked together three interesting Derbyshire villages.

We passed the ruins of Dale Abbey, possibly the oldest building these kids have touched. Muddy fields took us to Ockbrook, a Moravian Church settlement dating from 1750. On our way back to out lifts home at Stanton by Dale we walked through a field with an information board. This explained that this was the site where the Risley Lanx was discovered.

A lanx was a large Roman silver dish, this one discovered in the field in 1729. It was quickly broken up and apparently given out to the local landowners. The story of the Lanx disappeared until it became a local story from my hometown Bolton.

According to Wikipedia; in 1991, the elderly George Greenhalgh came forward with an item resembling the Risley Park Lanx, claiming that he and his family had found the pieces and welded them together. In fact, the piece had been crafted by his son, Shaun. George also presented a forged will that apparently bequeathed the Risley Park Lanx to his family. The British Museum was unconvinced that this was the original Lanx, but nevertheless considered it probable that it was a genuine period replica. The Greenhalghs, from Bolton, had cleverly invested in some actual Roman silver coins, which they melted down to create the lanx.

In the event, the Risley Park Lanx was sold through Sotheby’s in 1992 for £100,000. This was far less than the purported worth of the original – a million pounds  – yet still a clear indication that it was considered to be a significant historical rediscovery. When two wealthy Americans gifted the lanx to the British Museum in honour of David Wilson, outgoing director of the Museum, it was placed on display as a replica. It remained there until the rising publicity over the Greenhalghs forced its withdrawal for reassessment.

I can’t say the kids yesterday were interested, exciting things like that have to compete with keeping the “Snapchat chain” going. And it was just a field, not a photogenic one at that.

This entry was posted on March 20, 2016 by antondotreks in Blog, Bolton, Out and About and tagged Derbyshire, DofE, Risley Lanx.