A Round of Fairsnape Fell

It’s been ages since I’ve been up Parlick and Fairsnape. This was my local fell when I lived in Longridge and apart from a snowy winter trip around 5 years back, I’ve not been here for 20 years. It was a lovely settled day, forecast to stay sunny, so I headed north to the Bowland Fells. The roads north of Longridge always took some navigating and my memory of the L-R sequence needed to get to Fellfoot had faded. I did miss the third left turn resulting in a careful U-turn in a narrow road to find the parking spot at Fellfoot below Parlick.

As we set off up the road, a group of guys were just hefting their paraglider packs onto their shoulders as Luna, (my mainly trusty Saluki), and I passed. We chatted about her  unusual cross-breed and how her fur matted up on these long fell walks. Todays muddy trip would result in industrial scale grooming and bathing.

The incline path to the top of Parlick took us easily upwards, just a bit of puffing up the final steep pull alongside the fence. A clear view stretched out in front of us, our home fell, Winter Hill and its mast clear in the sunshine to the south-west, it was good to see the fine weather had stayed over home as well. Parlick looks over to Pendle Hill and the northern Peak District to the southeast and a clear coastline from Blackpool Tower around to the Welsh mountains to the west. 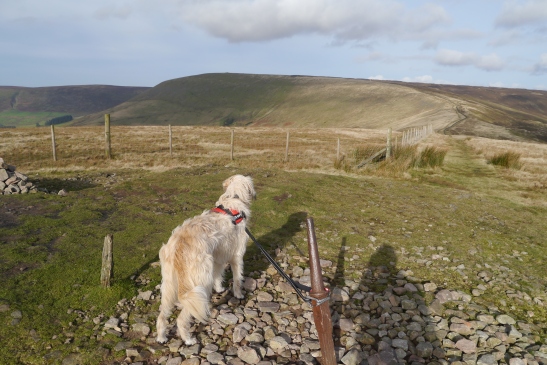 Saluki spotting Paragliders. Just the right side of the fence, so not infringing any laws.

Luna was fascinated by the Paragliders flying along the edge above us. She focused on the movement, not really sure what they were. A single glider just about stayed with them struggling to find lift in the light wind.

Ignoring the No Dogs signs on the gates from the Access area to the Bleasdale edge, we romped along the pleasant track, quickly to Fairsnape Fell and enjoying lunch in the palatial shelter at the top. Why are there No Dogs signs here? My innocent assumption was that as it was a CROW area they would be allowed, I would need to research this on my return. Well, I reasoned, this was a Public Right of way, where dogs are allowed, and with the many paw prints on the track I clearly wasn’t the first with a dog along here. 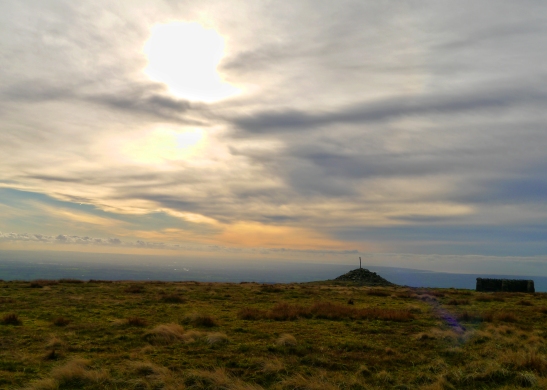 Fairsnape Fell and the Shelter

Over lunch I mused on one of my previous trips here. On a very cold and snowy afternoon in late December 1987 I came up here as a final walk before we moved to live in Sierra Leone, darkest Africa. I recall feeling very apprehensive about the forthcoming adventure. With hindsight, that was a very brave move for my family and I was right to feel worried about the trip.  It’s the unknown unknowns that always get one when in Africa.

Back to the present, thirty years on, a short spell of bog trotting took us through a gate, back to legal dog land, and along the improved track over Saddle Fell and easily down to Saddle Farm. Our way through the farm gates was blocked by the farmer sorting out his flock in the farmyard. We nervously waited until he spotted us there and waved us through. The sheep scuttled away as Luna approached so no barking this time. I don’t know who was most worried about Luna’s reaction, she is often re-acts quite aggresively when so close to livestock, but this went well for both the sheep and I.

Looking back to Parlick from Saddle Fell

From the farm a muddy track took us across the fields to Wolfen Hall and the car. This right of way was not provided with dog friendly stiles, most awkwardly placed and without space to jump over, Luna’s prefered way over fences. We managed with some heavy lifting, careful to avoid the scrabbling muddy paws.

This had been a lovely early winter walk in the sunshine over familiar fell.

Further research has thrown up the following;

Apparently, when the CROW Act came in, some land owners were given the option of banning dogs across their open land. Bowland Fells are mostly commercially managed  shooting estates so they decided to exclude dogs – hence the occasional “No Dogs” signs at crossing points. The dog exclusion zone doesn’t start until one gets to the top of Parlick; the front of the fell up from Fellfoot is common land. Beyond that, the way around to Fairsnape is restricted, although Wolf Fell on the otherside of the wall and fence has no such restrictions, as far as I could tell or find out.