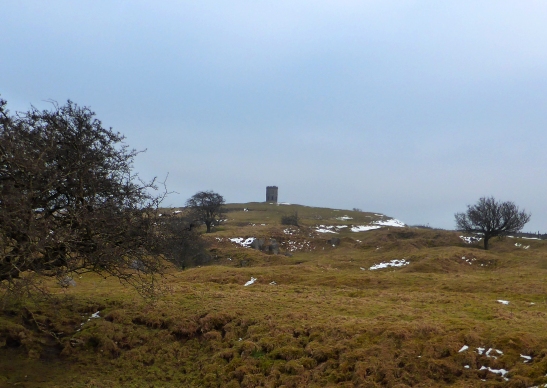 A walk with friends and dogs over Buxton Country Park at the back of their house. The muddy track through the wood took us up to the top of the hill, which was the site of old limestone quarries and kilns. We had views across to Burbage Edge and Axe Edge Moor with the odd line of snow remains highlining the white stone walls.

This moor was thought to be secure enough to let our sight-hound off its lead for a full speed run across the tops. We were pleased that she came back to us, panting hard but excited by her first run in this country.

Grinlow Tower is a 6m Victorian fortified hill marker built on top of a Bronze Age barrow,  on the pock-marked ridge running at 400 metres or so. Built in 1896 by Solomon Mycock a local farmer and landowner to replace an earlier structure. During the tower’s construction an archaeological dig here revealed several Bronze Age skeletons from the ‘Beaker’ period, along with later Roman items. This area does go way back.

This entry was posted on February 16, 2017 by antondotreks in Blog, Out and About, Peak District and tagged Buxton, Grinlow, Solomans Temple.