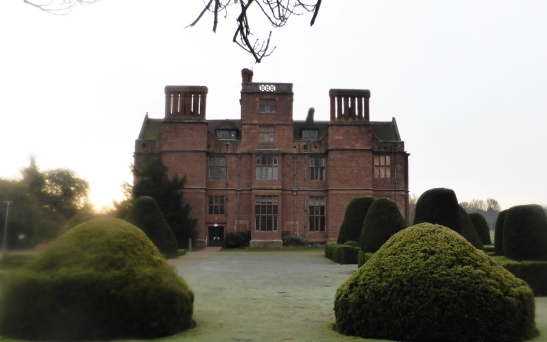 Sunrise at Condover Hall and gardens

I’ve not been able to keep up with my Out and About blog for a few days, having been away working. Staying at Condover Hall south of Shrewsbury, I have been on a World Challenge Leaders forum, picking up a few new techniques and networking with other leaders and the managers from HQ who offer us the best expeditions!

Condover Hall is the site for a sister company, where they run residential activity breaks, mainly for schools. This weekend the BBC were also there, recording the second series of the Ultimate Hell programme. One of the World Challenge Leaders had been involved in the first series as a “hunter” in the Brecon Beacons where he is in the Mountain Rescue team.

Condover Hall is a grand Elizabethan Manor house, built in the 1590’s. It is a lovely red colour from the local sandstone and still has its 17th-century formal box gardens. Mark Twain stayed there in the 1870’s and local tradition has it in the house there is an imprint of a blood-stained hand of the son of a lord of the Manor. The Lord was supposedly murdered by his son although it was the butler who was executed for the crime.

Inside, one can imagine the hall full of RAF officers from nearby RAF Condover during the second world war. No doubt the oak-panelled rooms overlooking the formal gardens were enjoyed by the residents then before any action in World War II.