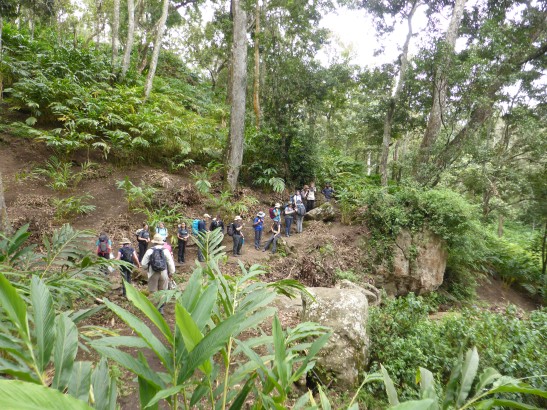 Our expedition bus from Kochi took 6 hours to climb into the hills along narrow roads busy with the many Indians going about their daily business. We climbed through small villages into the hills.  Many of the villages we passed through had large churches with black and white-clad nuns wandering along the road to the shops or visiting their parishioners.  After 90 minutes we stopped for breakfast at a roadside cafe, our first taste of real Indian food. We had Puttu, apparently, a breakfast staple eaten all over Kerela; rice with coconut; curry and lentils along with ripe bananas and grated coconut to mush it all up with and eat with our fingers. Yum.

As we traveled higher and further away from the coast the countryside became forested. Monsoon rain ran down the streets and the spectacular roadside waterfalls splashed out onto the main road. At the hill station at Chinnakanal, around 20km from Munnar in the Western Ghatt mountains, our support team were waiting for us. Anoop, our guide, had joined us at Kochi after the expedition briefing. We had expected to head off in the direction of the lake, where we should have been looking out for Elephants. Instead, we set off away from the lakeside up into the forest avoiding the Elephants which were on the rampage. Anoop explained that Elephants were very aggressive to the local people due to farmers extending their cultivated land into the forest and other areas. This encroachment on the Elephants living area cuased them to rightfully object and no frequently broke into the villages and farms and attacked people. This was sometimes fatal, a local farmer had been killed the previous week.  So over the next four days, we would check out with passers-by where the elephants are and avoid or take extra care. So instead of looking out for wild animals, we went out of our way to avoid them.

Monsoon coming in over Cardamom Hills

We headed out into the forest, alongside fields cultivated with ginger, coffee bushes and black pepper.  Alongside the fields and paths Lemon Grass grew and as we made our way into the forest the undergrowth was solely Cardamon plants. For the next four days, we would be walking mainly through these Cardamon plantations. This plant grew up to around 3 metres with long leaves that sprung back at you as you walked through. The group easily disappeared into the above head height plantation, so keeping close together was important. We followed farmers tracks through their crops, often along terraces built into the hillside. These plantations must have been built hundreds of years ago, the Cardamom and spice trade goes back into the early days of European exploration.

A steep pull up a hill took us above the forest and plantations. This was tough going for the group, we took it slowly and carefully. we followed the edge of a Tea plantation to our camp. Suryaneli Camp is a well provided spot, en-suite cabins;  a covered communal area and spectacular views down to the valley and lake where we started.

Across the valley, the hills were starting to attract the weather, clouds gathering on the heights. Soon the wind got up, blowing a card game and books from the table and my Tilley hat into the bushes, although I didn’t know until it was discovered the next morning after a frantic search. 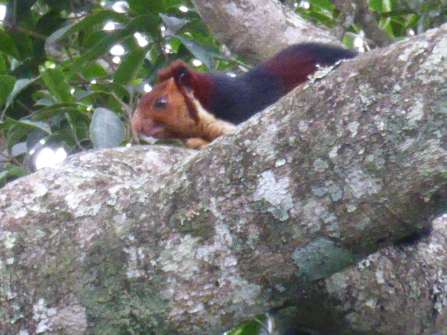 Anoop and I organised a nature walk before dinner, but no one was interested. So the two of us went of looking for some wildlife and birds. Spotting was disappointing, the strong wind keeping the birds to their roosts. We did see a giant Malabar Squirrel which is huge, around a metre long and multicoloured. Its only seen in this part of India.

That evening we tried to follow the England v Sweden World Cup quarter final,but no radio, TV or Wifi  available, so we relied on text updates from back home. Good result, so now we had to plan to be closer to a TV for the Semi-final.

One comment on “Rainforest Trek through the Cardamom Hills – Avoiding Elephants”

This entry was posted on August 13, 2018 by antondotreks in Blog, Expeditions, Mountain Leader.