Bog Trotting with Luna in the Southern Fells – Wainwrights 147 &148

This was my first trip out with Luna, our Afghaluki hound. We took along Steve and Nas for company. Nas always fills his rucksack with loads of food, often homemade, so he’s always good to have along on any trip.

A recent review of my Wainwright completion list worried me. At the current rate I’m not going to get it finished until after my knees give way and I look like the walker in the end-pages of Wainwrights Outlying Fells. So now trips to the Lake District always need to include outstanding summits.

I had been looking at the Southern Fells and seen that Birks, near Seathwaite, was a good base for at least 3 of those left to complete. An e-mail from Steve arrived, suggesting we meet up in the exact location I had planned to leave the car. That was such a coincidence.  So Saturday morning we parked at the Forestry Commission pull off and set off up through Dunnerdale Forest to the clear fell. A right of way shown on the map leading from the woods leading up to Green Crag was not visible on the ground so we headed of across the open moss.

Green Crag from Dunnerdale and the bog.

This was definitely a bog; small, slow flowing streams wandered across the area, leading one into water traps and hidden floating mats of moss. Above all this mess was the sharp peak of Green Crag and the serrated tops of Crook Crag. Slow and damp progress across the bog eventually took us to the Wainwright summit. Number 147 completed. This is not a high top, but neatly surrounded by a small crag with a grassy top. Views across to the Scafells, Dow Crag and Harter Fell show the southern fells at their best. To the west and south the Outlying Fells try to hide the sea, which just appears through the haze. 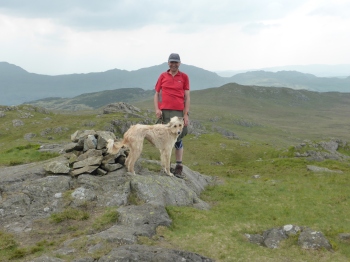 Back across the bog, not avoidable even by keeping to higher ground of Crook Crag early on, took us to the slopes of Harter Fell. A small track directly up the hill took us the 300 metres to the summit. We enjoyed a good scramble about the summits before we spotted  dark clouds rolling in over the Coniston Fells. The weather forecast had promised thunder and lightning that afternoon, so we reluctantly left the top and set off straight down, back through the forest to the car. Thunder rumbled over the fells to the east although it looked like much of the rain stayed over that side of the valley. A gentle rain had started as we arrived back at Birks. Further down in the valley, the rain was heavy. The narrow road to the Newfield Inn was covered in rain water after the storm had passed over. 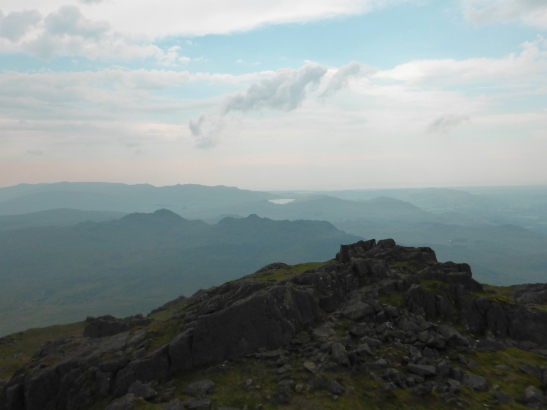 Looking East from Harter Fell, Devoke Water in the distance.

The Inn was packed, full of families who had decamped from the campsite for their dinners. Wet floors and leaking ceilings confirmed that the storm had completely drenched the Duddon Valley.