How to avoid getting lost in the Mist, a blast above Kentmere

It was supposed to be sunny; a days respite from the storms. Eva had done her damage and Storm Frank was due that evening. Mike and I decided on finding a dryish route in the Lakes, picking the closest to home – Kentmere Round.

Our way into Staveley was blocked. The bridge closed due to storm damage. But the back road took us through the village and up to Kentmere. We were thankfully in time to get a parking space beside the Village Hall. It was still cloudy and breezy when we set off, but the forecast still promised sun later. 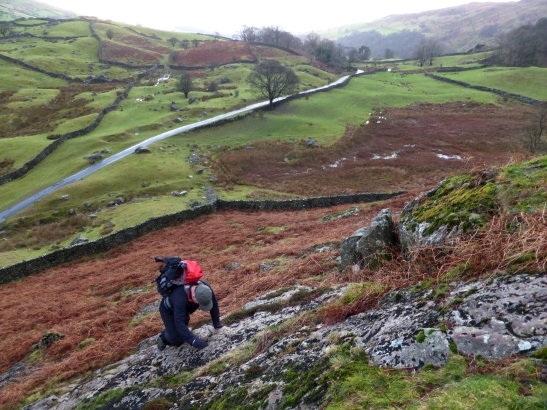 Optimistically we set off up the valley to Raven Crag, starting the day with a short scramble. Much of the rock was greasy, covered in wet moss, so we had to rely on the small rock snicks to get us up the slabs. A  resident Raven flew around watching us, it felt a bit like north of the Wall (GoT reference).

Above the crag, we crossed the damp and complex area of Knotts and Castle Crag crossed, keeping to the higher ground as we made our way up to Yoke and the cloud. This is a good area for some detailed navigation practice, I’ll have to remember it for a future Gold NNAS course. 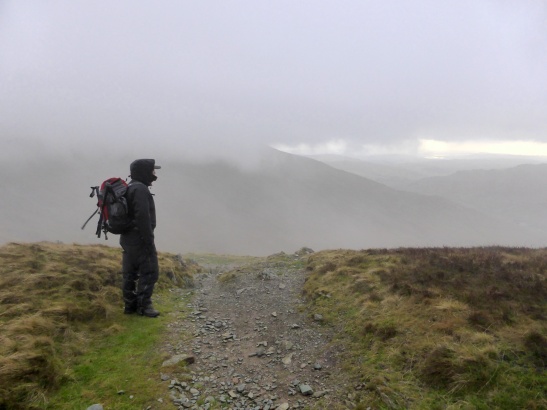 A cloudy view from Yoke.

Along the ridge we soon ticked off Yoke, Ill Bell and Froswick. Not many people were around, just a few families out for a Christmas break and dog walk.  Above the final gap, we set off into the mist hoping to find Thornthwaite Beacon for a sheltered lunch stop behind the wall. Storm Frank was starting with a gale. We kept our heads down, hoods up and made our way up the hill.

A break in the mist revealed the groundbreaking away to our right, not as expected. A check with the map suggested we had missed the fork in the path. The Harveys map had a path contouring the edge, but we headed off on a rough bearing to pick up the direct path. Others had been this way – a small path appeared in the heather heading in the right direction. It took us to another edge, so doing the nav properly this time, we worked out our position using back bearing and aspect of slope. A couple of fell runners disappeared in the mist showing us the path. Our track contoured around the head of Bleathwaite Cove at the head on the Kentmere valley, a bleak and lonely place.

Appearing out of the mist another group of fell runners startled us. They stopped for a map check; having made the same mistake as us, missing the fork in the track up to High Street. Deciding to take the short cut they soon disappeared into the cloud again. Beneath the cloud, we dropped  down to Nan Beild and the views returned. Small Water and Blea Water were below, with Hawswater coming into view.

Out of the gale and below the pass, we took a brief and welcome lunch stop. A group of mountain bikers made their way up from Mardale, carrying their bikes. Not a common sight here, its a really tough route on a bike. Father biker was on a nice carbon framed bike but struggled behind his two sons. They were getting frustrated, waiting for him to keep up. It had been a hard day for the three of them, up Longsledale over Gatesgarth to the reservoir and back over Nan Bield.

Time was getting on for Mike and me, so we returned down the valley. The prospect of a swift pint in Staveley on the way home was a welcome end to a damp and windy day. No sun that day in the Lakes.