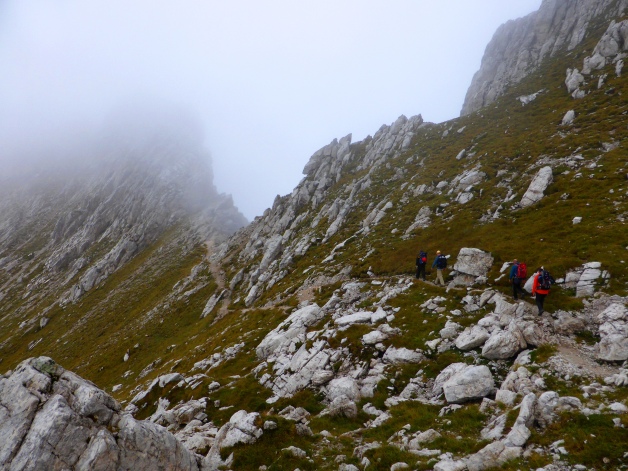 Rain on the tin roof of the Rif Pedrotti kept us from our sleep that night. There were many trips to the toilet during that disturbed night for us all, my insides deciding to play up for the first time as well. I had made it that far without problem, so can’t complain.

We eventually got up to a misty and damp morning, so our route choice was made easier. Some of us had wanted to tackle the short Senterio Livio Brentari, a 3C across the cliffs below Cima Tosa. Mike and I had done this on our previous visit, but I found it rather tough. A hold free 100m climb down to the glacier could have repaired but with the wire stopping short of a wooden ladder across the bergschrund it was still likely to test most of us.  So with the weather closing in, it wasnt really an option for today. We took the Senterio Palmieri over a couple of nice but misty passes, round to Rif Agostini arriving well-timed for lunch.

Repairs being carried out at Rif Agostini after it and we were blessed.

The refuge was half full of pension-aged ladies who had apparently come up from the valley in the jeep taxi. A priest was also there, who came and spoke to us in excellent english. He explained that this was to be a dedication of the refuge after the repairs. A couple of winters ago the hut had been damaged by an avalanche. Workmen were still fitting the roof to the entrance.

A lovely lunch of pasta and strudel was enjoyed before we set off into the mist again. Climbing up the steep approach to the cliffs  below the Cima D’Ambiez helped ease lunch down. Cloud was still with us as we arrived at the start of the Sentiero Ettore Castiglioni. This via ferrata is mainly ladders taking a route straight up the cliffs and into a wild flower filled gully. I think I was the only who noticed the Devils Claw on the way up, quite a rare plant only seen in the Dolomites. Unusually, I was at the back of the group as we emerged at the top in a narrow bocchetta at 2,859m, more a snick in the rock ridge really.  We were back in the snow by that point but the 13 ladders made the going relatively quick, easy and safe. 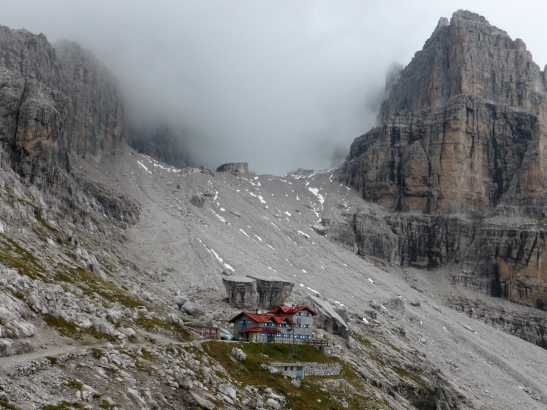 Rif Agostini, with the house size bolders just behind.

Starting up the 13 Ladders of Sentiero Ettore Castiglioni

From the edge we could see down to our next refuge an hour away. Up here the weather felt like it was closing in and snow started to drift down. We decided for a rapid descent, the way ahead looking  straight forward. Out came the trekking poles for a blast down the scree. Not far down we found unexpectedly found ourselves at the top of a cliff, a protected path wound its way down a 100m drop. Steve decided it was OK to throw his poles down and most followed his fling. Mikes poles did a spectacular bounce before the cork handles split on hitting the rock. I felt somewhat superior, I wasn’t going to risk my BD carbon fibre poles to that drop. My nice new rucksack has a special attachment to carry poles without taking the pack off, so that was called into use.

We arrived in heavy snow at the small but superbly located Rifugio Dodici Apostoli (XII Apostles). Its guardian was at the door to welcome us. Inside, the living room was quiet, just a group of 3 who  had shared our journey from the Tuckett. A couple more groups arrived; an old-timer with his daughter and a couple of English women. The old-timer had also followed us most of the way from the Tuckett although they had bottled out on the ice at the bottom of the Bocchette Alte. They told us that the drop to the glacier above the Agostini was not crossable so they had struggled that morning coming across the high vf to the Rif Agostina. The english pair had come over the glacier from the Rif Brentei, the way back we were planning for the next day. They suggested it would be tough in the mist and snow, so we all mulled over the option of the valley route back to Vallesinella.

Arriving at Rif 12 Apostoli in the snow.

Lovely meal that night in the warm homely hut. possibly our favourite.

This entry was posted on October 21, 2015 by antondotreks in Blog, Dolomites, Expeditions, Mountain Leader and tagged 2015, Brenta, Dolomites, Mountain leader, Via Delle Bocchette, Via Ferrata.