Nas becomes a Hero on the Via Delle Bocchette Centrali

Panorama from Rifugio Alimonta, looking up to the start of Bocchette Alte, going left and Centrali, going right from the glacier.

After our hard and exciting day on the Bocchette Alte, our 4th day in the Brenta was set to be the highlight. The Via Delle Bocchette Centrali is not as difficult as the Alte, but the high level traverses and the climbs around the base of the spectacular Campanile Basso and Alte are just superb. Exposure would be high but with well protected ledges. Even so, we were still in the #nofear zone, with a small glacier to cross, snow and ice still around and some tricky scrambling and ledges to tackle.

As we finished dinner the evening before in the Rif Alimonta, Nas was concerned about what was being written about him in my journal and subsequent blog. He asked that he made to be the hero of this story. Exactly what he had done to become a hero, I asked. It transpired that on our snowy climb across the Sentiero Benini, he had met a group of Italian ragazza (girls) during our lunch stop. Nas offered them some sweets from his carefully guarded stash. The girls rightly called him a hero. That was heroic, knowing Nas, but was it enough to make him the star in my writing up of our adventure?

Next morning was misty, which started to clear over breakfast, (the same old bread, Jam and weak tea again). Gaps in the cloud started to reveal sun not far above us. Out of the window we could see photographers grouped on the edge of the flat rock area in front of the refuge, waiting for the mist to clear. As the mist drifted by the vertical cliffs of the spectacular Cima Tosa and a stunning panorama of the whole Brenta Alta valley was revealed. 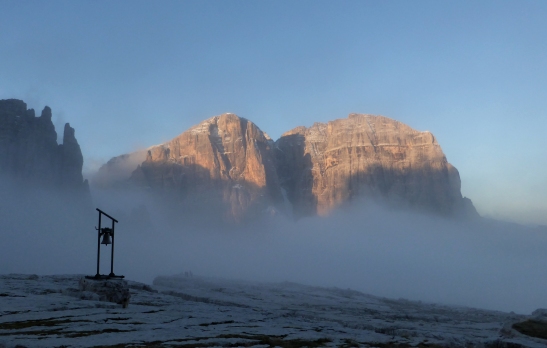 Mist Clearing from the Rif Alimonta remembrance bell across to Cima Tosa.

Approaching top of the ladders at start of Via Delle Bocchette

The first ledge on the Centrali as the mist swirls around.

We had a small glacier to cross to get to the start of the via ferrata. An easier angle and helpful side moraine meant it was not as much of a problem as the day before. Up the ladders and wire with a bit of unprotected scramble across snow-covered rock gave us a sharp reminder that this wasnt going to be as easy as a normal summer’s day 3C grade. But after a short traverse across an exposed edge we arrived at the start of the ledge, now some 2,800m up. What a fantastic route, ledges, ribs, scrambling down gullies and rocks, wooden boards suspended above long drops, ladders. Mist started to thin out and clear mid morning giving us great views down to Molveno village and paragliders some 2,000 m below us.

I caught my hand on a section of broken wire, the frayed edges penetrating my finger. Blood was running down my hand and dripping onto the rock. A quick application of a plaster stopped most of that, but I did notice more large splashes of blood on the rock as we started off again. Someone clearly had been caught by the same piece of wire, but were not able to stop the blood, leaving a gruesome red trail alongside the usual red and white paint. Nasty.

As we edged along the ledge between Campanile Alto and Basso we heard a helicopter, then a scream. Rob and Dick looked to see a BASE jumper plunge down from Campanile Basso. It was scary just being there, but not as much as the video of the actual jump. You can probably see us at the beginning if you zoom in.
https://player.vimeo.com/video/138895701” target=”_blank”>

This day was our rest day, arriving at the welcoming Rifugio Tosa/Pedrotti in time for lunch and a lazy afternoon. Mist closed in during that afternoon and it started to rain heavily in the evening and night, making our route choices for the next day rather interesting.

Nas, in a typical heroic stance

Anyway, back to Nas. His family is sometimes not complimentary about his waistline, he is, by his own admission, not shaped like the average Alpinist. His mountaineer friends have been known to also call him Bat-Man from the way he wore his jacket cape-like over his shoulders. According to the dictionary a hero is one who is admired for their courage, outstanding achievements, or noble qualities. After sharing some tricky routes with Nas, he is definitely fits most of this definition, although perhaps not the noble qualities. Definitely our hero! 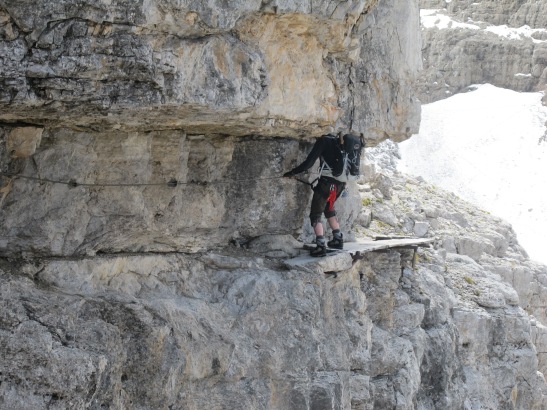 Crossing Planks towards the end of the VF. Not certain where my head had gone!

This entry was posted on October 16, 2015 by antondotreks in Blog, Dolomites, Expeditions, Mountain Leader and tagged Brenta, Dolomites, Via Delle Bocchette, Via Ferrata.