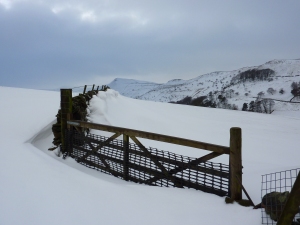 We could tell that conditions were good. Bowden Bridge car park was filling up and climbers were leaving with sacks packed with high end ice axes, crampons and ropes. Ski’s even made an appearance. After the heavy snow the night before, it was clear that Mike and I were not going to get any ice climbing at our level, which was just as well as I had left the new crampons at home, dohh!

Breaking snow across the fields up to Kinder Low was hard, and a sign of the struggles to come. We took the direct route, scrambling over the rocks of Kinder Low End, up to the frosty barrow at the top. With the mist down and sky blending with the ground, it was time to dig out the compass and made sure we headed north to the trig point. Still no tracks on this part of Kinder, we were still breaking new ground.  Then someone approached and waved, so we headed back along the footprints to the edge, and the cloud lifted to show the view down into the reservoir.  As we walked across the tops we caught a glimpse down into Red Brook gully, a good Grade 1 winter climb. “Lets do that after we have sussed out the downfall”, “Good plan”. 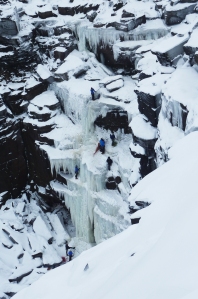 The downfall was busy, covered in many hundreds of pound of gear, with many poorer climbers tackling the standard route, Great Tower, and the vertical ice almost from top to bottom of the fall. Definitely in condition.

After a hasty sandwich while we watched the climbers we headed back toward Red Brook, looking for way down to the start. The cliffs and slopes below were covered in thick snow, and it was tricky to spot a route down. One attempt left us on a cliff edge, and scrambling back up to the edge, helped by the edge of the Ice axes. The snow was around 1 1/2 meters deep and crumpled when stood on, impossible to climb. 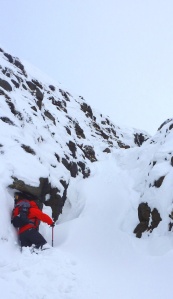 Eventually we made our way the the bottom of the gully and had to thrash through deep snow up the centre. This was more of a physical struggle than winter climbing. There were a couple of short pitches, though not climbed with any finesse, as snow crumpled under of feet. Anyway, it was fun and certainly kept us warm. 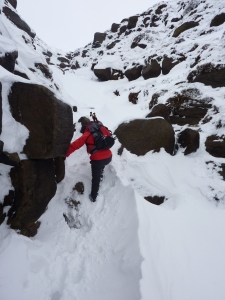 A bit of a wall in Red Brook 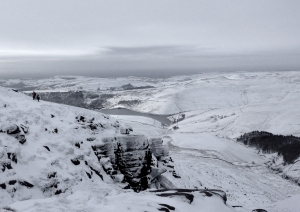 Kinder Edge above Red Brook. The only sunshine of the day.

That was it for the day, so back via the downfall, to enjoy watching the queue lengthen. A fun slide down from Sandy Heys, helped by our poles, direct to the footbridge at the bottom of Williams Clough brought us to slush. Temperatures were definitely rising now and the rain started, so it was quickly down to the car park and a swift pint in The Sportsman. 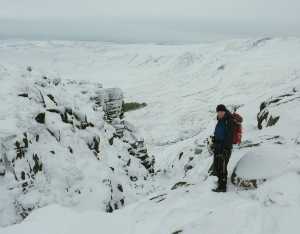 Pleased with the ascent.