Had a good week on holiday with Alison in Andalucia, walking everyday in the interesting countryside and around Alfaix. Most of these walks were around Rio de Aguas. Strange name when you think about it, River of Water, considering also that this is the dryest region of Spain. We did find the reason for the name later in the week, but our first visit saw the devastation caused by the storms at the end of September. 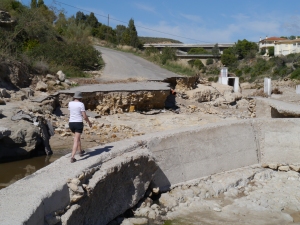 Washed away road across Rio De Aquas at Alfaix.

We revisited Fossil Valley, across the decimated road into Alfaix village. This valley runs up a deep rambla just off the river, which is a deep cut into the rock, with walls full of fossils. It was now full of bamboo at all sorts of angles, making it feel more like a jungle trip.

We extended the walk up the campo area and followed a good track across the low hills back to base. Good to meet with 50 or so walkers from Mojacar Walking group while we were out.  It looks like we were doing their walk 12 in reverse. http://www.mojacarwalkinggroup.com/walks/Mapinfo/walk12.htm

Next we took in a trip to Cabo de Gata Nijar natural park. a lovely remote area  along the coast north of Almeria. Starting from Agua Amarga, we followed the long distance track GR92 south along the coast to Cala de Enmedio, which has the most amazing white cliffs, eroded into Gaudi like shapes. Then across the hills to Cala del Plomo through a small valley with palms, olives and goats, strange for this very scrubby part of the coast. The beach appears to be the preserve of naturists (nudists), so we found a remote part of the beach to paddle and have our butties. The walk back took us back along the cliffs, with lovely views across the village.

The weather remained lovely, so we then took in the Ruta de la Mineria below Bedar. This was a walk we had done last year, and enjoyed exploring the old road into the mines, walking through tunnels across cliff edges and over the top of the campo. Earlier this year the area at the beginning of the walk had been hit by wild fires, which had cleared some vegetation around the mines, showing the shafts and tunnels across the valley.  Another fun and interesting walk.

Next day, the weather closed in, a storm from the Sahara covering the car and patio with a layer of red sand. It was cold and overcast, so we visited Almeria castle (La Alcazaba), which was huge and full of interest.

The weather started clearing up next day, so it was back to walking in the afternoon, this time to Los Molinos in the karst, (gypsum) area close to Sorbas caves. This dropped down past the ecological farm of the Sunseed project, to the Rambla Rio De Aguas and the springs emerging from under the cliffs. Again this rambla was a jungle, full of bamboo and in places almost blocked with boulders the size of houses. This is the source of the Rio, emerging from the karst desert, now collected into channels, some built by the Romans.

We didn’t have time to follow the rambla up to Sorbas, so returned  the same way, finding a lovely crazy paving path back up to the road. This is an area worth a longer walk next visit. 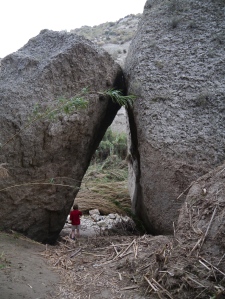 On Sunday we planned a leisurely lunch up at Los Pastoras restaurant up in the Sierra Cabrera. This remote area is between Alfaix and the sea at Mojacar, and has very few paths across the tops. We drove around a while, trying to avoid the Caza areas, but even when we parked up at the ruined Cortijo El Dondo, a hunter and his son returned to the car parked next to us and un-loaded their shot gun and rifle next to us. They hadn’t managed to shoot anything though. Anyway, our path took us to up the high point and around a corner a brand new picnic site and wildlife hide appeared along with signposts pointing to a new waymarked track, from just above the restaurant. As we were looking forward to our lunch we didn’t have time to explore, but another route to do on our next visit. Fantastic views across to the Sierra de Alhamilla and along the coast to Cabo de Gata-Nijar.

Last day, a late flight so we wandered back up the lower reaches of Rio de Aguas from Alfaix. Behind a large Citrus orchard our path was blocked by a lot of bee-hives and and irate bee-keeper. He shouted “arriba” at us, which I thought meant look up, strange. (turns out he was saying “abejas” – bees!)  Anyway we quickly turned around away from what looked like a lot of angry bees. This meant we missed the way back and ended up scrambling up the side of a rambla, trying to find a path back. After a sweaty hour we made it back to Alfaix, and a session in the pool before the delights of Ryanair to Manchester.

This entry was posted on October 28, 2012 by antondotreks in Blog, Walking in Spain and tagged Alfiax, HPB, Rio De Agaus, Sierra Cabrera, Spain.