Up into the Snow in the Brenta Dolomites

This evening the conversation in our bunk room went as follows;

It had been a hard day and we were all tired, but the conversation kept going in this vein right up to the enforced silence and lights out at 10:00pm.  During the night we apparently had an invasion of rats, at least that’s was Nas told us as he waved his trekking pole around the room after flashing his headtorch in everybodies direction. We didn’t get to the bottom of what was actually going on that night.

Next morning was the start of our second day along the Via Delle Bochette, going up high along the Sentiero Alfredo Benini (2C). This starts from the Passo del Groste at the top of the lift from Madonna Di Campiglio. We were in the Rif Tuckett having walked up from Vallesinella yesterday. So we took the 316 path and its short-cut 331 to the start of the via ferrata on the east face of Cima del Goste. The morning started fine, if a little misty and cold; the altitude keeping the air crisp and clean. From the hut the path wound around under cliffs behind the refuge, over a limestone plateau before turning around the end of the Cima. Snow remained in the north-facing amphitheatre, left over from the storm of a couple of nights ago.  We were up at 2,600m now and the air was cold and feeling thin. As we climbed the icy rocky track up to the first ledge the crisp snow beneath our boots made it tricky. This part of the ridge was not getting any sun and so in places the snow was well compacted into ice. We were very careful.

Rob, with Passo Del Groste below. Pietra Grande behind.

Looking across to the start of the ledges of our route. 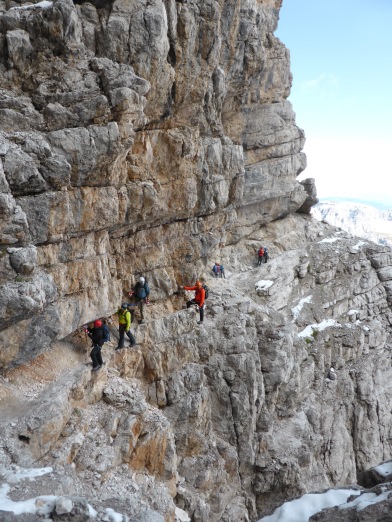 Ledges on the Senterio Benini.

After a tricky scramble the first ledges appeared as we moved round into the sun. Our high path, was still covered in snow though, but thankfully less icy. We concentrated on the path, occasionally stopping to briefly appreciate the views down to Molveno on our east side and Madonna di C on the west. The villages, both some 1,500m below us, gave a great sense of airy exposure. Wires were fitted where needed (on a sunny day), helping with our protection. With the mountains in this condition we could have done with a bit more security. Ledges took us up to nearly 2,900m and the air was starting to feel a little thin. We were beginning to feel the stress of being in this tricky place; difficult conditions; extensive exposure and by now we were running well behind in our timings. Each of us dropped into our zone, concentrating on getting carefully and safely across the next patch of snow. 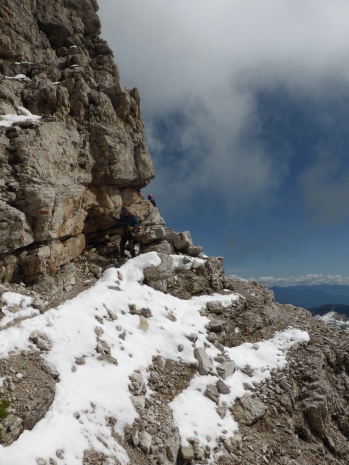 Crossing onto the west side of the ridge we looked down into Vallesinella. We were on the snow-covered mountain seen high above us when we set off the day before. A small glacier – Vendretta di Vallesinella Superiore – had to be crossed, our trekking poles were the best help here, it wasnt steep. After this snow field we dropped down some rocky edges and around another cliff face to the final ladders and stemples taking us safely onto the Bocca del Tuckett. This Bocca, (a col) is at the head of the Vendretta (glacier) di Tuckett between us and the refuge some 400m further down.

It was time to put our crampons on. A variety of lightweight crampons were produced from our packs, but even with their help we still struggled down the slush covered icy glacier. My lightweight pair was particularly useless, so it was a struggle getting down, taking a couple of un-gracious bum-slides on the way, nearly wiping Dick out on the first slide.

Looking down to Rif Vallisinella.

As we reached the hut we all looked shaken by the seriousness of our day. Mike was shattered, Dick was shocked, Steve was tired and worn out, Nas almost dead. A treatment of Hot Chocolate with a shot of brandy helped recovery before the reviving shower and replenishing dinner.

Our next day was to be the crux of our trip, the hardest and highest via ferrata in the Brenta. It was graded a good 4C plus the extra frisson of snow and ice in places and a cloudy sun-free day, it was going to be hard. Who would succumb to the fear and take the safe route round to the next Refuge?